During the climate conference in Bonn, 17-27 June 2019, the ASEAN (Association of Southeast Asian Nations) Negotiating Group on Agriculture (ANGA)  played a major role in shaping future action on the Koronivia Joint Work on Agriculture.

At the 23rd Conference of the Parties (COP) to the United Nations Framework Convention on Climate Change (UNFCCC), the Koronivia Joint Work on Agriculture (decision 4/CP.23 referred to as KJWA) was adopted – a landmark agreement for the agriculture negotiations under the climate convention which emphasises the key role of agriculture and food security in the international climate change agenda.

The decision identifies six topics that will guide future work:

More information on the KJWA.

Milestones for ASEAN engagement under the UNFCCC

The Association of Southeast Asian Nations (ASEAN) has been actively engaged in delivering the KJWA decision. In 2016 the ASEAN agriculture sector formulated its first joint submission on the identification of adaptation measures in agriculture (Submission C); and identification and assessment of agricultural practices and technologies (Submission D);and submitted this to the 44th meeting of the Subsidiary Body for Scientific and Technological Advice (SBSTA).

This achievement was facilitated by the ASEAN Climate Resilience Network (ASEAN-CRN) through the formal ASEAN Technical Working Group on Agriculture Research and Development (ATWGARD).

In order to further promote exchange on the content and implementation of the KJWA, in 2017 the ASEAN Negotiating Group on Agriculture (ANGA) was established by the ASEAN Climate Resilience Network (ASEAN-CRN), along with its Terms of Reference and Standard Operating Procedures endorsed by ASEAN Ministers of Agriculture and Forestry (AMAF).

Since then, ANGA has been very active in reaching a number of important milestones that have contributed to the work under the UNFCCC. Its first major output was a joint regional submission outlining shared views on the modalities for implementation of the KJWA (topic a). Viet Nam, as the current chair of the ASEAN Ministers of Agriculture and Forestry (AMAF), forwarded the joint submission to the UNFCCC on behalf of ASEAN in November 2018. Representatives from ASEAN Member States (AMS) then participated in COP24 in Katowice, Poland, in December 2018 in the first KJWA in-session workshop where they presented their submission and engaged in discussion with other parties.

ASEAN submission on 2a

At the most recent climate conference from 17 to 27 June 2019 in Bonn, ANGA was announced publicly as a new negotiating group and was accepted, especially by the G77 and China group. The close cooperation demonstrated by the ASEAN members during the negotiations was considered a political success by many observers. The Philippines’ submission and presentation on the topics (b) and (c) during the in-session workshop was met with great interest and support from other ANGA representatives and further countries.

ANGA also contributed to the negotiations that led to 1) the acceptance of the Katowice proceedings and 2) the acceptance and shaping of the New Zealand proposal to offer a complimentary technical workshop in March 2020 that will contribute directly to finalising the KJWA in December 2020.

Link to KJWA draft conclusions proposed by the Chairs at SB50

ANGA will continue its engagement and is planning its next interventions during the COP25 in Chile, from 2 to 13 December 2019.

The group will continue to receive support from the Climate Smart Land Use in ASEAN (CSLU) project funded by the German Federal Ministry for Economic Cooperation and Development and implemented by the Deutsche Gesellschaft für Internationale Zusammenarbeit (GIZ) GmbH in close cooperation with the ASEAN Secretariat (ASEC) and the UN FAO Regional Asia Pacific Office. 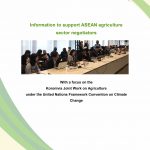